Over on our Robin Hood crowdfunding campaign page, we have begun a short series of interviews with the cast, in order to allow our supporters to become a bit more familiar with both the tale we'll be telling at the London Wetland Centre next month and the lovely, talented people who will be bringing it to life.  I hope that you, too, might enjoy finding out more... :-) 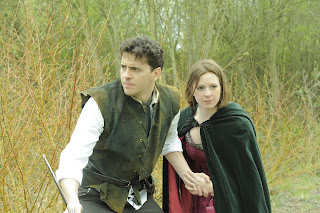 Please introduce yourself and your character.
My name is Lindsey Huebner and I will be playing the part of Marian in Shadow Road's exciting new production - taking over the London Wetland Centre this summer!

How old were you when you first read, watched or heard the story of Robin Hood and what did you think of it?
Some of my very earliest memories are watching Disney films with family members and close friends. Like the stories of Cinderella and Beauty and the Beast, I feel like the tale of Robin Hood has always been a part of me.
Although I'm mildly disappointed that Emma's interpretation doesn't have myself and Fed as foxes, I am overjoyed that the character of Marian is not your typical Disney damsel. Strong, capable and fierce in her love of Robin Hood, she is the kind of heroine I wish I'd encountered more in my childhood.

What made you want to get involved with this production of Robin Hood at the London Wetland Centre?
What really drew me to this production are those very aspects that make it unique!
First off, it is an outdoor promenade production. Pulling off a solid performance is a feat in and of itself... Add on top of that passing planes, rogue children/ducks/otters, honking geese, passing trucks, surprise weddings, and whatever weather the skies can throw our way, all whilst attempting to safely shepherd 30 audience members to our various locations... Well, it sounds like a pretty glorious challenge to me!
Secondly, I did martial arts as a youngster, and although I'm not in favour of real violence, I'm a big fan of stage combat! This was highly emphasised in the audition brief, and throughout the production we have gotten to work with Claire Llewellyn, an Associate Teacher at one of London's premiere stage combat clubs: RC-Annie.

What’s your favourite line spoken by your character – or any other - in the show?  No spoilers, please!
There are a few lines in this show that bring a smile to my face or give me chills, but out of context, they might not make a lot of sense to an innocent reader. This being said, one of my favourite lines in reference to Robin is, "Outlaw, yes, but never 'common'. He is but one in all the world."  I like it because of its simple truth, and through it we get a glimpse of the astounding love that Marian feels for Robin.

What’s your favourite thing about working in the theatre?
There are loads of things that appeal to me about a career in theatre. My current favourite thing is the people one meets both off and on the stage. Casts come together quickly and, through performing together, the acts of vulnerability and trust give way to a sense of cameraderie like nothing I've ever experienced.

And your least favourite?
For what one gains in an ever-changing, fast-paced, fulfilling, creative career choice, one loses out in stability and security. Financial concerns are prevalent among actors - particularly those recently embarked upon this life path. Fortunately, such tribulations only enhance creativity and resourcefulness.

Tell us why we should come and see the show in two sentences or less!
You know the legend. Now become immersed in it.

Tickets for Robin Hood - at 6.30pm or 8.15pm on Thursdays and Fridays throughout June, from Thursday 9th June until Friday 1st July - are available from the Wetland Centre website HERE.
Posted by Emma K-F at 15:49