A Word on Auditions

It seems like a very long time ago now but there was a reason I started a brief post on auditions shortly before we held ours for Robin Hood, so I'm going to complete it anyway!

At the time, I wanted to remind people that there was no need to be nervous coming into an audition room.  Unless the role you are auditioning for specifically calls for it, or the director and/or casting director whom you're about to meet happen to be particularly unpleasant or unintelligent people (and if that was the case, why would you want to work with them?), they are not going to be looking to catch you out or make you feel uncomfortable.  Far from it.  In fact, they want you to be as comfortable as possible - to feel at ease and entirely free to be yourself - so that you have the best chance possible of being the answer to their casting prayers!

Like a hopeful audience, waiting in the dark for the curtain to rise on the play, or for the first few frames of a film to flicker across the screen, they want you to be brilliant - to be the leading man or lady they've been looking for, the hilarious character actor they're desperate to find or the lovely, talented performer they just can't wait to work with in any capacity.

They want to love you - and it is for that very reason that if there are any tiny slip-ups or stumbles, they will, in all likelihood, give you the benefit of the doubt.  When you enter the audition room they are, or at least they should be, on your side - and they will stay there until you give them a reason not to be.

And I don't mean until you forget a word or two, or call someone by the wrong name.  I mean until you show them either that you are, for any reason, wrong for the part (in which case, again, it's probably better for everyone concerned, including you, that you don't get it) or - and this one's significant because it could cause longer term problems for your career - that you would not be easy or pleasant to work with.

Whether you're making a film, staging a play or embarking on any other substantial creative project, you know that you are going to be spending a lot of time over the coming days, weeks or even months with the people you cast here and now.  You also know that a sizeable amount of that time will almost inevitably be both difficult and stressful.  It is therefore only natural - and wise - to take a moment to consider exactly whom you want to be facing those challenges alongside.

As each actor leaves the room, you consider first whether or not they are suitable for the job and then second, and no less important, would you want to work with them on it?  Could you stand being shut up in a rehearsal room or stuck on a film set with them for hours or days at a time?  What about for weeks?  And when times get hard - you always hope they won't but you know they probably will - is it likely that having this person there will make things better or worse?  If the answer to all of those questions is 'yes' and 'better', then no one is going to be happier than the director sitting across the room from you... :-D 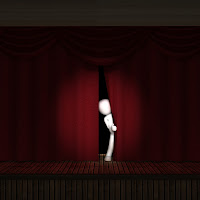 P.S. It goes without saying (or at least it should) that you should be asking yourself the same questions about the director and any other members of the cast and crew whom you meet - do YOU want to work with THEM?  Auditions are a two way street! :-)
Posted by Emma K-F at 15:44