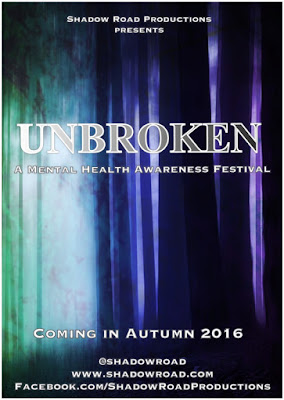 Have you written a short play or a standalone scene – or created a piece of spoken word, music, movement or dance – dealing with mental illness, its effects and consequences, or the realities and myths surrounding the subject? Would you like to? Or would you like to direct one?

As part of my tiny theatre company's longstanding commitment to the issue of mental health we will be staging UNBROKEN, a mini-festival on that very subject, in London this October and we would like to invite anyone interested in getting involved – either as a writer, director, choreographer or composer – to get in touch.

UNBROKEN will showcase a number of new short plays and performance pieces, all dealing with the issue of mental health from different angles. It will also include at least one or more panel discussions.

As mentioned above, we are open to both short plays and scenes/extracts from a larger work that are able to stand alone in performance, as well as pieces of music, movement, spoken word or dance. Each of the chosen pieces will deal with some aspect of the issue, but the precise approach taken or subject explored will be up to its creator – for example, living with someone suffering from mental health problems can, in some ways, be just as difficult or alienating as suffering from the condition yourself.

UNBROKEN is an entirely voluntary event which will be staged in connection with one of the UK’s main mental health charities. This mini-festival will be the first of its kind for Shadow Road. Given our enduring concern with the issue of mental health, however – particularly when examined in relation to the military, as was the case with our original full-length play, Dreams From The Pit – we do hope that it may prove to be the first of many.

If you are interested in getting involved with UNBROKEN, there is plenty more information available – including submissions details and dates etc – here on our website: www.shadowroad.com/page6.htm

Please have a read and then drop us a line at shadowroadproductions@gmx.com.

Caesar Casino | Shootercasino
Caesar 온카지노 Casino is a new online gambling site launched 제왕 카지노 in 메리트 카지노 2020. We are proud to offer a wide selection of casino games such as Roulette, Blackjack,